Dendra Systems‘ aerial seeding platform spread millions of seeds to create a koala corridor, in just a few hours.  It’s one of the first times in Australia drone technology has been used to create koala habitat. The project is a collaboration between the World Wide Fund for Nature-Australia, the Australian Government, the Turner Family Foundation and Dendra Systems.

There are more than 2 billion hectares of degraded land around the world. Diminishing food sources and habitats is hastening the rate of species extinction, exacerbating climate change. Home to Koalas, Bettongs, Wallabies, and many more species, native forests in Australia have been decimated by catastrophic bushfires. Up to 19 million hectares were burnt in the devastating 2019-2020 bushfire season, impacting nearly 3 billion animals.

Dendra Systems has the ambitious plan to restore over 20,000 hectares of Koala forests in Australia during the next four years, bringing these ecosystems back to pristine condition and creating green corridors for native species to become more resilient and paving the way for recovering critical habitats in Australia and scaled restoration of ecosystems around the world. To kick off this ambitious project, we’ve started collaborating with the World Wide Fund for Nature-Australia, the Australian Government and the Turner Family Foundation. 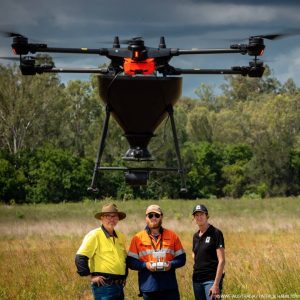 In phase one (on the 23rd of November) we started the restoration process of eleven hectares on the Turner Family Foundation property at Hidden Vale in Grandchester, 76 km west of Brisbane. Hidden Vale is a 4560-hectare private protected area incorporating a Nature Refuge of more than 3100 hectares. Dendra’s aerial seeding platform, in just a few hours, spread millions of seeds to create a koala corridor. We have dispersed a seed mix containing 40 different plant species to create a corridor rich in biodiversity. Plants include native grasses and koala food and shade trees such as blue gums, iron barks, melaleucas and acacias. Blue gums (Eucalyptus tereticornis) are such a favourite food for the region’s koalas, the trees have been dubbed “koala caviar”. 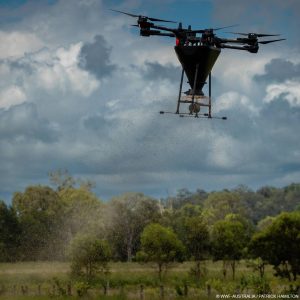 It’s estimated this will generate 15,000 trees. Not all seeds will successfully germinate or survive the sapling stage, which is part of the natural process. These trees will become homes for the 45 koalas identified in the region and help strengthen their population. The plantings will boost safety for the local population with tracking collars showing koalas have been walking across the disused cow paddock, potentially exposing them to attack from wild dogs.

This project is supported by the Australian Government’s Bushfire Recovery for Wildlife and their Habitat Program. Federal funding is being provided from the $18 million koala package announced by Environment Minister Sussan Ley. WWF-Australia has also contributed funding, as part of its Regenerate Australia program, with Dendra Systems contracted to conduct the drone seeding and monitoring to ensure success.

“WWF aims to double the number of koalas across eastern Australia by 2050. To do that we need to test innovative solutions such as drone seeding. If it’s a success here it can be rolled out in other locations,” Ms Pritchard said.

Ben O’Hara, TFF General Manager, Land & Environment, said at Hidden Vale there are promising signs. In just three years, 45 koalas have been individually identified on the property. Twenty of those koalas received lifesaving interventions including treatment for Chlamydia. Twenty-eight joeys have also been detected in this sample over the past three years.

“We’re generating what we describe as a koala fountain – a strong source population that can spread out along habitat corridors and bolster koala numbers throughout the region,” Mr O’Hara said.

Dr Susan Graham, CEO and co-founder of Dendra Systems, said Dendra’s technology is optimised for biodiversity restoration and this project can serve as a blueprint for bushfire restoration and degraded land recovery globally, strengthening ecosystems resilience and paving the way for scalable nature-based solutions to restore this beautiful natural world.

“Without a massively scalable approach to restoring ecosystems, we cannot reverse the damage and restore natural systems to health,” Dr Graham said.

“Working side-by-side with leading environmental organisations and committed landowners, Dendra Systems has the ambitious plan to bring ecosystems back to pristine condition and pave the way for recovering critical habitats in Australia and scale restoration of ecosystems around the world,” she said.

From the seeding drones that will plant the right mix of vegetation at scales to the AI-driven platform that will direct restoration work, this new technology can scale restoration to an entire continent. This project will serve as a blueprint for bushfire restoration and wildfire recovery globally, strengthening ecosystems resilience and paving the way for scalable nature-based solutions that successfully contribute to the world’s carbon goals.

Regenerate Australia is the largest and most innovative wildlife recovery and landscape regeneration program in Australia’s history. Launched by WWF-Australia in October 2020, the multi-year program will rehabilitate, repopulate and restore wildlife and habitats affected by the 2019-2020 bushfires, and help to future-proof Australia against the impacts of changing climate. Find out more at www.wwf.org.au/regenerate-australia

Established in 2017 by Flight Centre founders, Jude and Skroo Turner, the Turner Family Foundation focuses in ecological restoration of the Turners south-east Queensland rural properties and operates the Hidden Vale Wildlife Centre in partnership with the University Queensland. The foundation aims of restoring habitat and wildlife for the betterment of future generations. www.turnerfamilyfoundation.com.au

Dendra Systems is a pioneer in ecosystem restoration at scale. Dendra’s vision is to empower humanity to restore the balance of our natural world. Global-scale ecosystem degradation with its associated biodiversity loss, and increasing carbon in our atmosphere, are two of the world’s greatest challenges. Dendra Systems is developing the most powerful tools for ecosystem restoration today, putting the power of ecology-trained AI and automation into the hands of environmental managers. Find out more at www.dendra.io.

BIOSTREAM announced as one of 15 finalists for the XPRIZE Rainforest

Early and Often: Weed Management Principles for Mine Site Rehabilitation