By Ally OsborneSeptember 28, 2022No Comments

In a previous article we looked at the growing demand for nature-based solutions in the carbon credit markets and the need to put a value on more than simply carbon emissions mitigation. In this article and a follow-up, we look more closely at the urgent imperative to address carbon and nature together. And we examine what progress has been made in devising agreed metrics for biodiversity.

Both humanity and Earth’s flora and fauna now face two existential threats arising from our relationship with the environment over the last two hundred years: climate change due to global warming and the degradation, collapse and loss of global biodiversity. The rate of species extinction is currently hundreds to thousands of times higher than the average over the last 10 million years¹. For example, global losses in populations of vertebrates – mammals, fish, birds, amphibians and reptiles – have averaged 60% between 1970 and 2014². It is estimated that between 10% and 30% of mammals, birds and amphibians are currently on the brink of extinction³.

Climate change and biodiversity loss are closely interlinked. Climate change impacts ecosystems and the safety, resilience and behaviours of species. Meanwhile, ecosystems and their biodiversity play a fundamental role in both climate adaptation, and in the flow of greenhouse gases (GHGs) via the nitrogen, carbon and water cycles⁴. Healthy biodiversity supports ecosystem productivity and the multiple services it provides (see Fig 1.) including nutrient cycling, soil formation, pollination, water purification and regulation, human resources (food and fuel etc), and, of course, the sequestration of carbon that’s essential for mitigating global warming⁵. However, it is estimated that the decline of ecosystems is currently costing the global economy an estimated $5 trillion a year in lost natural services⁶. 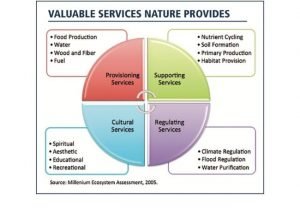 There is clearly now an increasing imperative to address the twin challenges of global warming and biodiversity loss simultaneously. In 2019, UNFCCC COP 25 emphasised “the essential contribution of nature to addressing climate change and its impacts, and the need to address biodiversity loss and climate change in an integrated manner”⁷. Two years later, 50 leading scientists reporting to the Intergovernmental Panel on Climate Change and the Intergovernmental Panel on Biodiversity and Ecosystem Services declared that humanity must solve the climate and biodiversity crises together or we would solve neither⁸.

Co-benefits in the carbon markets

Actions by companies and other organisations (and by individuals) to mitigate greenhouse gas emissions including CO2 should ideally follow a hierarchy that starts with avoidance in the first place and then moves on through reduction, substitution, and sequestration if possible. However, where further emissions mitigation is not practicable, or where actions will take time to implement, or in the case of some emissions-regulated ‘compliance’ industries, then the use of carbon credit offsets can play a vital role in avoiding, reducing and removing GHGs. In both the compliance and voluntary carbon markets (VCM), projects are either technology-based, for example renewables, direct air capture or clean cook stoves, or they are nature-based solutions (NbS), for example afforestation, reforestation, or mangrove restoration. In addition to the primary objective of carbon mitigation, NbS projects can also deliver UN Sustainable Development Goal (SDG) co-benefits such as food security, sustainable livelihoods and, of course, restored or safeguarded biodiversity (see Fig 2.). In the VCM, as of June 2022 different VCM credits have been trading for between $5 and $18 per ton of CO₂e (carbon dioxide or GHG equivalent) with high-quality NbS credits priced at the top end⁹. Of these, NbS credits with biodiversity co-benefits represent the highest volume of offsets sold and fetch premiums relative to offsets without them¹⁰. 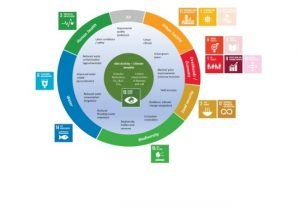 However, whilst there can be significant differences in demand and price between carbon credits with biodiversity and those without, to date there has been no formal, standardised mechanism for measuring and valuing that additional benefit. Carbon has a simple metric – the mitigation credits are priced in the common currency of, say, US dollars per ton of CO₂e. This works because a ton of GHG is easy to define and measure and it’s globally fungible. By contrast, biodiversity defies easy definition notwithstanding that the Convention on Biological Diversity (CBD) does indeed define it as “the variability among living organisms from all sources including, inter alia, terrestrial, marine, and other aquatic ecosystems and the ecological complexes of which they are part; this includes diversity within species, between species, and of ecosystems”¹².

This, of course, is easier written and said than actually measured and valued. Clearly it is in the interests of the planet’s diverse environments and of humanity’s well-being if we have standards and metrics that can be used to support the enforcement and monitoring of sustainable behaviours. In addressing the biodiversity challenge, the world’s governments, regulators, environmental agencies and commercial companies need to know where they are, what they need to aim for and how they are performing over time. This is also true more specifically in the carbon markets. In projects where biodiversity is a co-benefit we need, if possible, a consistent way to measure objectives and outcomes. That ideally requires a standardised fungible metric. The result should be greater transparency, globally recognised pricing, increased liquidity, and easier tradability. The consequence of these would be higher demand, larger trading volumes and – the ultimate objective – more safeguarding of the world’s biodiversity.

To date however, high-quality carbon credits including NbS-based ones have been scarce, in part because co-benefits such as biodiversity have rarely been well-defined. In addition, different buyers value diverse co-benefit attributes differently. The inconsistency among credits means that matching a buyer with a corresponding supplier can be a time-consuming, inefficient process that’s transacted ‘over the counter’. Moreover, the heterogeneity of credits means that there can  too few credits of a particular type being traded and hence the volumes are too small to generate reliable daily price signals¹³.

Important to have but difficult to devise

Over the last 30 years there have been various attempts to grapple with the issue of marrying economics with ecosystems and biodiversity. One of the most significant was the 2005 Millennium Ecosystem Assessment report produced by more than 1300 scientists from 95 countries. However, despite being a comprehensive assessment of the world’s ecosystems, and despite providing numerous reasons to carry out economic analysis, the report struggled to make recommendations regarding methodologies on scale and unit metrics for accounting and valuation¹⁴.

The Australian Government has recently announced the establishment of a biodiversity market for Australia. While details are currently limited, it’s likely the bill will reflect the intent of the Agriculture Biodiversity Stewardship legislation introduced to Federal Parliament in February 2022 which sought to create a tradable biodiversity metric with monetary value that could be ‘stapled’ to the compliance market’s Australian Carbon Credit Unit and aimed to:

The consequence of this announcement will be to facilitate and stimulate increased investment in projects that support the protection and restoration of biodiversity.

Elsewhere globally, various framework and classification systems also exist that seek to navigate the complexities of measuring and valuing ecosystem services but again stakeholders have had difficulty when trying to actually apply them ‘on the ground’¹⁵. Biodiversity has different meanings for different sectors, has diverse aspects and scales to consider, and is inherently multi-dimensional¹⁶. How then to devise a scorecard that packages these elements into comparable, universal measures of ecosystem value? ¹⁷

A carbon project with biodiversity benefits requires accurate biodiversity baselines to be established as well as on-going measuring, reporting and verification (MRV) – all of which adds to cost¹⁸. The result of these challenges is that markets – whether in biodiversity offsets or in carbon credits with biodiversity co-benefits – have stumbled over the issue of establishing trading units of account¹⁹. So far “nature’s monetisation” is still at an early stage²⁰. Nevertheless, the activity around formulating standardised metrics is gathering momentum. In a follow-up article we look at more recent developments in the search to link ecosystems with financial markets in general and the carbon markets specifically.

Carbon: Built To Last? Reversibility And The Importance Of Permanence