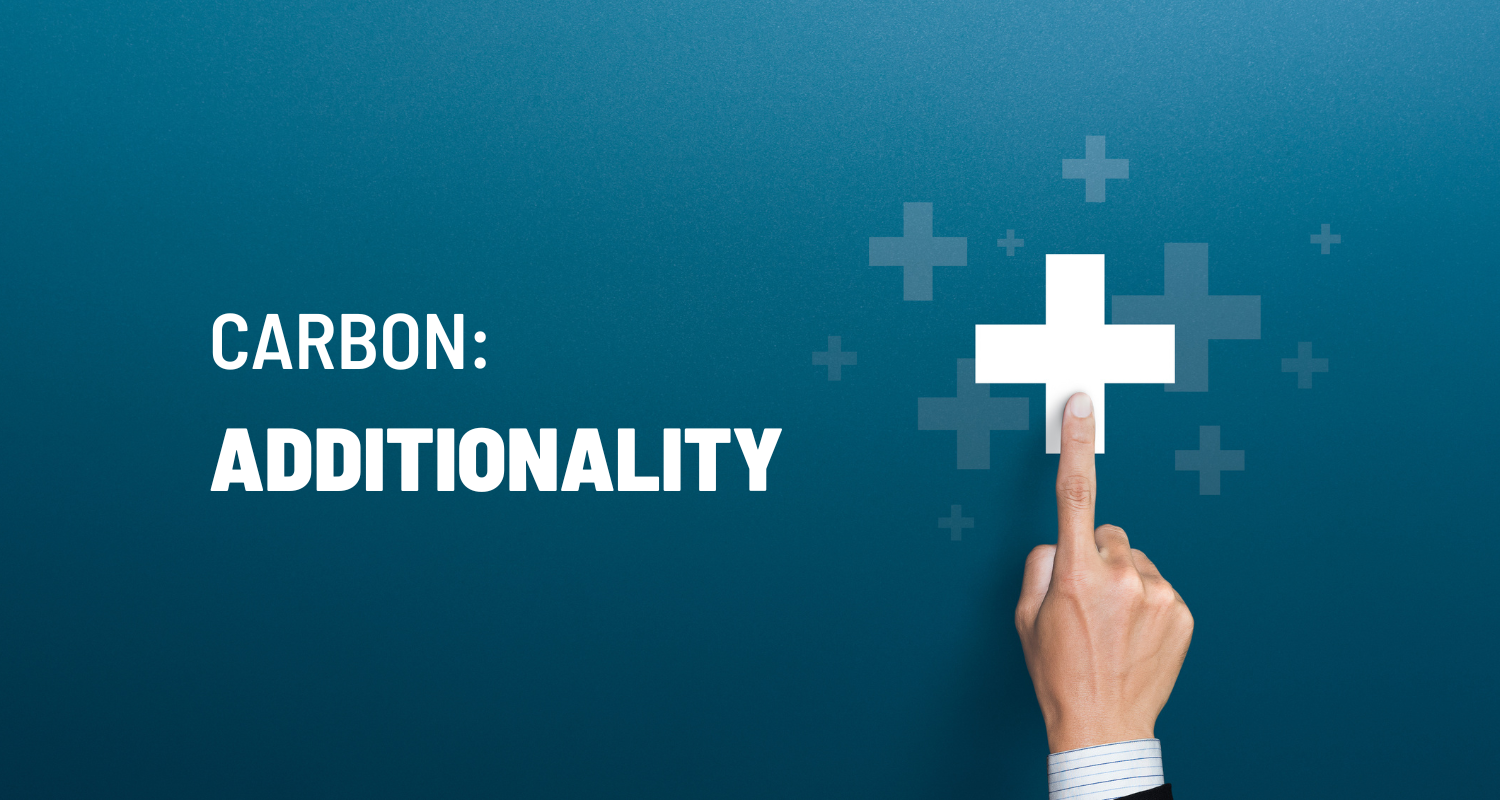 Carbon: A Tale of Two Systems and how Additionality Applies

A key concept in any baseline-and-credit carbon market (and sometimes indirectly in a cap-and-trade system) is that of additionality. As discussed in an earlier piece on the increasing appetite for high-quality credits, the original 1997 Kyoto Protocol concept of additionality is now commonly broken down into its constituent parts, namely additionality, permanence & measurability.

Carbon: A tale of two systems and how additionality applies

The concept of additionality was defined by the Kyoto Protocol in Article 12 on the Clean Development Mechanism (CDM). It required that certified CDM projects result in “reductions in emissions that are additional to any that would occur in the absence of the certified project activity”¹. In order to establish this, a business-as-usual (BAU) baseline is formulated and if a project activity leads to lower greenhouse gas (GHG) emissions than would have otherwise occurred under BAU then the project is deemed to be additional².

Whilst originally designed for the CDM, additionality is now applicable to projects in other carbon markets as well, both compliance and voluntary (known as the Voluntary Carbon Market or VCM). The concept has also been expanded to address several other ideas about additionality with, for example, legal and regulatory, or financial and investment implications³. However, for our purposes we will stick to the core concept of GHG mitigation.

It’s also worth bearing in mind that the term “reductions in emissions” in Article 12 can be somewhat misleading since other forms of GHG mitigation are relevant as well (see Figure 1). Reductions can also include the concept of avoidance and refer both to:

In addition, GHG mitigation may instead be classed as a removal project – strictly speaking, emissions are not so much reduced as actually taken out of the atmosphere. Examples of removals may again be: 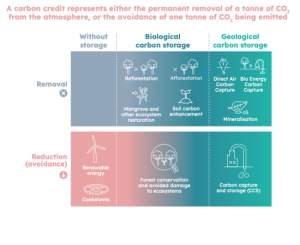 Two different systems: how does additionality fit in?

There are two primary carbon market types, or systems that have been favoured in attempting to lower global emissions, in both net terms (i.e. taking carbon sinks into account such as forest sequestration) and absolute reduction terms. As we shall see, additionality is more directly relevant to one system type than the other.

A cap-and-trade system establishes a total allowance of GHG emissions by country, region or industry – examples include the EU Emissions Trading Scheme (EU ETS) covering ~1.5bn tCO₂ₑ p.a., and China’s recently launched national ETS covering ~4bn tCO₂ₑ p.a. (the world’s largest by emissions volume⁵). The cap, or sum of emissions allowances, is typically set by the government or regulatory bodies centrally, and with reference to current emissions. Allowances can be traded between emitters that have a surplus or shortage of allowances relative to their emissions. The cap is reduced over time so as to balance the dual goals of achieving an agreed emissions reduction target by a given date while continuing to support the economic activity of that geography or industry. A key challenge in administering a cap-and-trade system is determining the level of the cap over time. How far and how fast should the cap be reduced?

Cap-and-trade systems, with centrally set caps are almost exclusively used in compliance markets. In its pure form, the system is focused on reducing absolute emissions and does not require or allow offsetting via carbon credits. (About 80% of the required decrease in net emissions by 2050 is forecast to come from cutting emissions but a level of greenhouse gas emissions will still be inevitable and therefore existing and future excess greenhouse gases will also need to be removed from the atmosphere). In the case of pure cap-and-trade, the issue or question of additionality doesn’t really arise. The entire system is by its nature additional compared to if it didn’t exist and the relevant participants did nothing to mitigate their emissions.

However, in a cap-and-trade’s ‘impure’ form it often incorporates baseline-and-credit system features, specifically using carbon credits to offset emissions when emitters cannot or prefer not to access or purchase additional allowances. Cap-and-trade systems in, for example, California and South Korea allow the use of offset credits. (The EU ETS used to allow CDM credits but no longer and is currently therefore a pure cap-and-trade scheme). The point is that in cases where off-setting, as well as permit trading, is allowed, carbon project additionality is indeed a factor. Projects, and the credits generated, need to demonstrate GHG mitigation over and above a BAU baseline – just as they must in the other type of system that we’ll now turn to.

Baseline-and-credit systems such as the CDM in the compliance market and the VCM in the voluntary market don’t issue a finite and reducing level of emissions allowances. Rather, the system is based on the creation of carbon offset units, or credits. Each represents one metric tonne of removed, reduced or avoided CO₂ₑ which can be purchased by companies and other organisations (and individuals) to offset both their own emissions and their indirect footprint (along their supply chain, for example) – so-called scope 1, 2, and 3 emissions (more on those here.)

The number of credits used to offset emissions is driven by the amount of direct or indirect emissions emitted relative to some regulatory or self-imposed emissions target. Let’s say, for example, a company emits 100 tons of carbon dioxide equivalent per year (tCO₂ₑ p.a.), and has a regulatory or voluntary target of emitting 75 tCO₂ₑ p.a. It can either generate (if it directly finances / creates a carbon project) or purchase 25 tCO₂ₑ p.a. of carbon credits and use these to offset its emissions to hit its target.

That said however, in today’s carbon markets, high-quality reputable credit providers emphasise that there should be a hierarchy of mitigation. Organisations need to do everything they can to reduce and eliminate their emissions before turning to offsets. The criticism that commitments to ‘net zero’ are merely a shorthand for offsetting all emissions is – or at least should be – simplistic. Nevertheless, if an organisation has a ‘rump’ of difficult or impossible-to-eliminate emissions, or if it’s going to take time for mitigation measures to kick in, then buying high-quality carbon credits is a logical and justifiable decision. 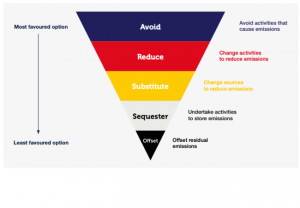 What constitutes ‘high-quality’ is itself a complex issue (for more on this see here) but amongst the necessary characteristics additionality is key. As emphasised earlier, carbon credits should only be created – and therefore an organisation’s emissions only offset – by a certified project that would not have happened anyway.

Whilst additionality is therefore fundamental to the integrity of a baseline-and-credit system it’s also contentious because it can be difficult to determine in practice. There are several challenges including:

1. Emissions mitigation, both in project design forecasts and in actual results, has to be measured against a hypothetical alternative reality where carbon credit funding has not happened. First, this counterfactual cannot be proven absolutely; instead, it must be inferred. Second, monitoring and evaluating predicted or actual outcomes for e.g. an energy-efficiency project or forest carbon storage can be highly complicated⁶.

2. A related problem is establishing a baseline that credibly estimates what the business-as-usual outcome would have looked like i.e. the quantity of emissions that would have happened in the absence of carbon funding. There’s no fail-safe way to be certain about that, and BAU forecasts have often proven to be quite inaccurate, especially if they cover long time periods⁷. Therefore, baselines need to be calculated conservatively and be based on verifiable information⁸.

3. Even so, information provided to e.g. investors and auditors could be biased by actors who have an obvious incentive to increase the likelihood that a project will be deemed additional (and has a favourable baseline). And even if not deliberately biased, the assessment of additionality and setting of baselines will still inevitably contain some subjectivity⁹.

4. The challenges of additionality are also relevant to the potential problems of leakage and permanence. If a carbon project unintentionally relocates emissions elsewhere (so-called leakage) then effectively its additionality status has been compromised. For example, the reforestation of pastureland may drive local farmers to clear forests elsewhere for new pastures¹⁰. The additionality requirement can also be breached if mitigations subsequently prove to be impermanent. For example, forests may be destroyed by natural events such as fire, pests, or disease, or by illegal logging or burning¹¹.

5. Finally, addressing the issues posed by establishing additionality is likely to increase administrative, financial and other transaction costs associated with measurement, reporting, and verification¹².

Testing, testing – and monitoring too

Additionality is therefore not straightforward and many different tools have been developed to achieve accuracy of additionality testing whilst trying to minimize the administrative burden for the project developer. Essentially, however, there are two approaches to determine the baseline by which additionality is tested as part of a project’s validation: “bottom-up” project-based testing and “top-down” performance standards and benchmarks¹³. A project-by-project approach can be more precise because it can take account of specific attributes and site conditions. On the other hand, the top-down method can reduce transaction costs since project activities are automatically considered as additional if, for example, they are of a particular type and/or included on a ‘positive list’¹⁴.

Either way, such validation is an ex-ante assessment of whether a project qualifies. But there also needs to be ex-post assessments that the mitigations promised in a carbon project’s design are actually delivered.  Hence, monitoring, verification and certification standards are used to ensure that offset projects perform as was predicted. For example, there is sometimes a lag time between the start of a project and when it starts producing carbon offsets. This is especially true for forestry projects – the trees have to grow for several years before they have absorbed enough carbon that can be quantified and sold as a credit¹⁵.

This is exactly where Dendra System’s combination of high-resolution image capture and AI-powered computer analysis can help. We can enable project developers in the carbon markets to make more accurate assessments of biomass and therefore of carbon sequestration. And this can enable governments, regulators and credit buyers to have more confidence that what should be happening on the ground really is happening.

Carbon: Beyond one Metric