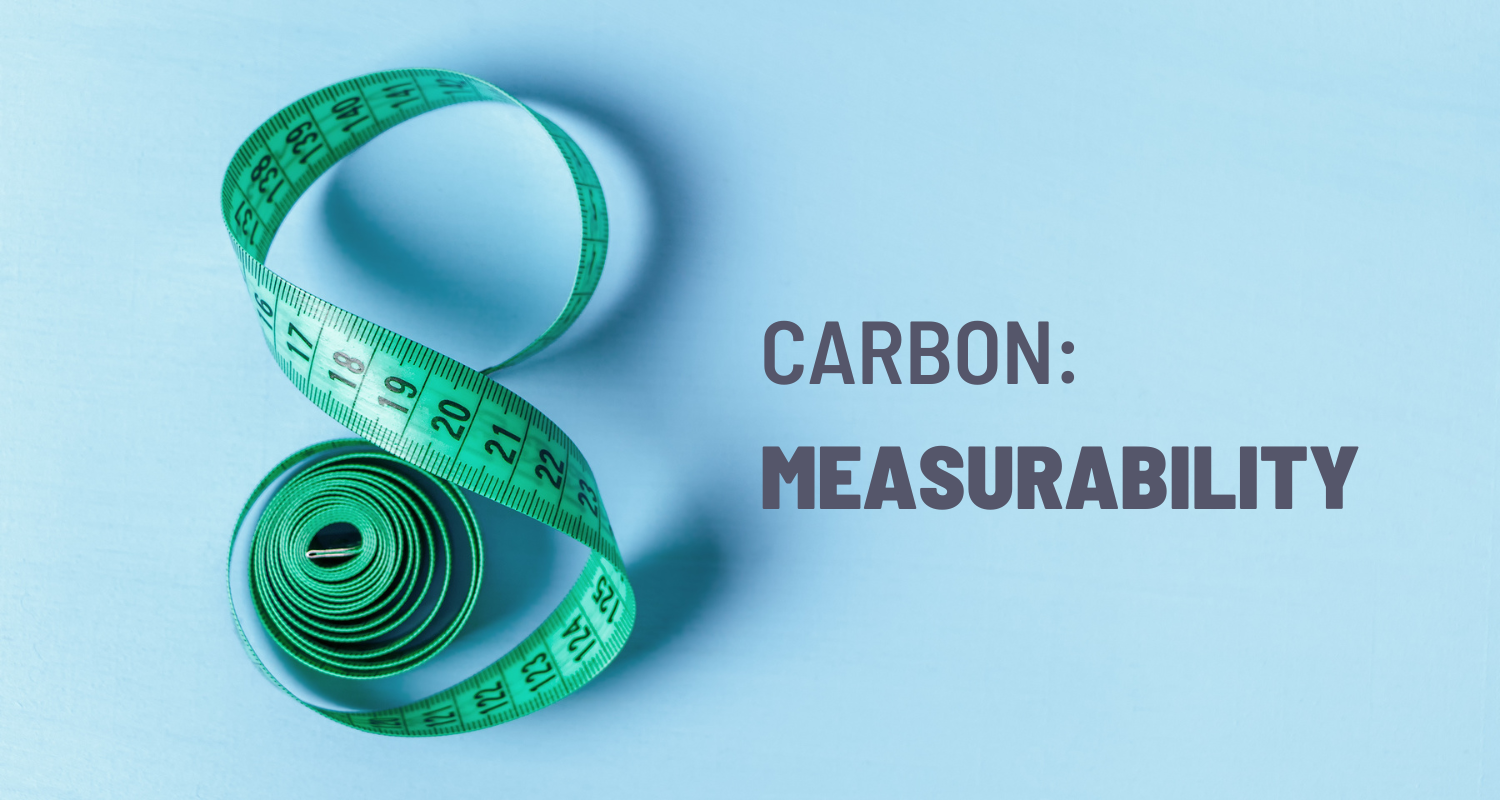 In a previous article we looked at the concept of additionality, originally a key feature of the 1997 Kyoto Protocol and later the 2015 Paris Agreement, and an intrinsic part of any baseline-and-credit carbon market. Here, we investigate another fundamental component of the carbon credit markets – the vital but often problematic issue of measurability.

Accurate, reliable measurement of biomass and carbon sequestration is essential to the preservation and restoration of the planet’s ecosystems. It is also a key factor in humanity’s goal to avoid, reduce and remove greenhouse gas (GHG) emissions. We need to know both how much we must mitigate in the coming years and where we are now. More specifically in the carbon markets, measurability is essential for project accountability and for stakeholder trust in the mitigation claims of carbon projects and the credits they generate.

Along with the Paris Agreement’s requirement for additionality in carbon mitigation projects, it also stipulated that projects should deliver “real, measurable and long-term benefits related to climate change”¹. In fact, without reliable measurement, neither the additionality, the permanence nor the actual outcomes of carbon mitigation can be credibly established.

These Clean Development Mechanism requirements have since been extended to projects in other carbon markets as well, both compliance and voluntary carbon markets. Clearly, stakeholders – whether project developers, investors, credit buyers or regulators and governments – must have confidence that mitigation is happening or is going to happen i.e. what the reality is. But prior to that, measurability is also needed to establish additionality by formulating a credible business-as-usual (BAU) baseline to measure the project outcomes against. And ongoing measurability is vital to ensure that GHG mitigations are actually permanent. These requirements are applicable to both:

2) Reduction/avoidance projects – again either technological such as renewables and carbon capture and storage (CCS) or NbS such as avoided deforestation.

In all carbon projects, the mitigations need to be quantifiable, using recognized measurement tools (including adjustments for uncertainty and leakage), against a credible BAU baseline.

Take, for example, an avoidance project that will generate carbon credits by preserving a forest area at risk of being logged. The developer must prove additionality (i.e. without the project the trees will be cut down) and present a methodology to calculate the emissions mitigation (which is challenging and depends on multiple factors like the size and age of the trees and their location). The developer also needs to design the management and monitoring practices that will ensure and prove the ongoing, long-term success of the project (i.e. that the forest area is in fact continuing to sequester carbon and has not subsequently succumbed to fire, invasive plants, soil erosion, pests, disease or logging). Third-party auditors need to validate the developer’s assumptions regarding methodology, permanence and additionality. And in order to issue carbon credits, the project must be certified which means that after project implementation another audit process is required to verify the mitigation outcomes².

In theory, at least, the process steps are clear but that masks the challenges and pitfalls that exist in reality. Carbon projects and their credits rely on a credible, measurable link between the mitigation activity and the outcomes. Sometimes that link should be relatively straightforward to establish – for example, a company using CCS technology to capture and store emissions should be able to point to ‘hard’ numbers with relative ease. However, other activities such as NbS have higher uncertainty in their measurement and monitoring³. Moreover, both human error and possibly deliberate misinformation can arise leading to accusations of ‘greenwashing’ and a lack of trust in carbon and other ecosystem projects.

“There’s a lot of greenwashing around and we have to actively uncover that,” says Tim Christophersen, the former head of Nature for Climate with the United Nations Environment Programme. According to Christophersen, of the one billion hectares of landscape that countries worldwide have promised to restore “most” remain a promise rather than a reality. India, for example, has covered an area the size of Denmark with plantations since the 1990s, but national surveys show forest cover increasing only marginally. “Even at a survival rate of 50%,” says Christophersen, “we should have seen more than 20 million hectares of trees and forests but that hasn’t happened – the data does not show that addition.” And according to the UN Food and Agriculture Organization (FAO) the problem is widespread around the world – plantation initiatives have often been “promotional events” with inadequate action taken to fully implement an initiative and/or to foster continued tree growth (see Fig.1  for examples)⁴.

In the Philippines, for example, mangroves were planted six years ago as part of the country’s National Greening Programme (NGP). The NGP was an attempt to grow 1.5 million hectares of forest and mangroves between 2011 and 2019 but a report by the country’s Commission on Audit found that in the first five years 88% of it had failed. According to one expert, Dr Jurgenne Primavera, 90% of the mangrove seedlings died in one area because the type of mangrove planted was suited to muddy creeks rather than sandy coastal terrain. The government chose it, Primavera suggests, because it was readily available and easy to plant – “Science was sacrificed for convenience.” However, the local authority in charge of the planting disagrees and claims that 50% had survived in some locations⁵. All of which only highlights the importance of accurate, verifiable measuring capabilities.

In the ecosystem restoration arena, and in carbon markets specifically, there has been considerable scepticism surrounding the credibility of certain types of projects. This includes questions about the performance and permanence of NbS, and about biodiversity damage from afforestation projects planting non-native species and/or monocultures. Such concerns have been legitimate but it’s not all bad news.

September 2021 saw the launch of the Integrity Council for Voluntary Carbon Markets (ICVCM) which aims to set and enforce global benchmarks so that carbon credits are of high-quality⁶. In fact, the standards for assessing quality have already become much more exacting. Leading carbon certification agencies combine rigorous scientific methodologies, peer review, accurate surveillance and regular verification to ensure project integrity. Meanwhile, the UN’s FAO has recently introduced a new framework for monitoring landscape restoration projects. National forest monitoring team leader, Julian Fox says 20 indicators have been agreed with governments and other partner organisations. “The idea is to build countries’ capacities to measure and report their progress in a meaningful and transparent way. It’s about making good monitoring data available to the international community.” However, the task of collecting the data still falls to the countries themselves and there’s no guarantee they will do it⁷.

This is where developments in satellite monitoring and other remote sensing systems – combined with field data and machine learning analysis – can contribute significantly to measuring biomass, carbon storage and biodiversity. Dendra Systems are at the forefront of these developments, helping to answer crucial questions. What quantity of biomass does an area contain? How much carbon is being sequestered? What’s changing? What are the threats from invasive species and the threats to biodiversity? And how can we optimise forest management to safeguard and maximise biomass potential? A report by McKinsey says it expects innovation in measurement, reporting, and verification practices to accelerate over the coming years. At Dendra, that innovation is happening now. We have over eight years of experience in data capture, measurement and analysis vital for ecosystem insights and restoration. Dendra understands the complexity and scale of the global challenge. We continue to build tools to address it.

Carbon: A Tale of Two Systems and how Additionality Applies

Carbon: Beyond one Metric